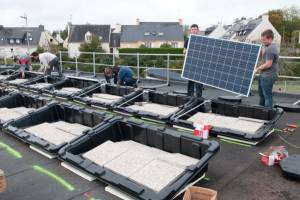 Presented at the workshop of the EMPOWER project « Innovative Financial Instruments » organised for the Investment Bank of Saxony Anhalt, the solar panel rental system set up by the city of Lorient and the company Oncimè was again a great success!

What is the principle of this setting up?

It is based on two elements: self-consumption and rental.

Self-consumption: the electricity of solar panels is directly consumed by the buildings on which they are installed. This method of using photovoltaic electricity is particularly suitable for buildings that operate during the day: schools, administrations, companies, etc.

Leasing: the company Oncimè, via a public procurement procedure, offered the city of Lorient a leasing contract. The city pays an annual rent, and in exchange, has the right to use the solar panels as it sees fit. The most interesting way to use these panels is of course to position them on the roof of your buildings to produce electricity!

In the end, the price of renting solar panels makes it possible to obtain electricity cheaper than « grid » electricity, purchased from suppliers operating power plants in France.

The city of Lorient has been particularly sensitive to Oncimè’s civic project: the shareholding is oriented towards the inhabitants of the territory, « one person = one voice » governance is part of the philosophy of the social and solidarity economy, and the Oncimé company also ensures, every year, in equipped buildings, activities around photovoltaics and renewable energies for schoolchildren and city officials.

The buildings now equipped: the Town Hall, the Kersabiec scoal group, the Apprentice Training Centre and, during the construction work, the René Guy Cadou school.

In view of the large number of requests for this innovative financial model, which makes it possible to finance the installation of solar panels on a self-consumption basis thanks to the savings generated on the electricity bill, the main documents presenting this approach are now available on the EMPOWER wikipedia.

Find here the slides which present the project